That summer morning should be the same as other mornings. People carry out their activities as usual, even though World War is raging out there. Children go to school, mothers do household chores at home, while fathers go to factories or other places to make a living. On that sunny morning, no one would have thought that their lives would stop at 8:15.

That day, August 6, 1945, history recorded the first use of the atomic bomb in war.

Hiroshima, a large city in the southern part of Japan’s main island, Honshu, became its first victim. The bomb, which had an explosive power equivalent to 15,000 tons of TNT, destroyed about 70% of the building and killed around 140,000 people, tens of thousands of them died instantly. Temperatures at the center of the bomb reached 7,000 degrees Celsius with a blast radius of 5 km. The explosion, which resembled a giant mushroom, caused a massive shock wave and instantaneous air expansion, which caused a large number of deaths. Some people yawn without a trace while others die crushed by building rubble or broken pieces.

Most of the victims on that day were civilians, and “only” around 20,000 people were from the military. Ninety percent of doctors and nurses died or suffered injuries because the bombs that were originally going to be taken down on an important bridge in the city reportedly missed so that it exploded above the hospital. 42 of the 45 hospitals in the city were destroyed or badly damaged so that most of the victims died without having the opportunity to get first treatment.

After facing the destruction of the city and the deaths of most of its citizens, residents of Hiroshima still have to face the effects of radiation from this bomb. Acute radiation symptoms such as vomiting, headaches, nausea, diarrhea, hair loss, until bleeding are experienced by residents affected by this radiation. This radiation sickness can cause death several weeks to several years afterward. The long-term effects experienced by victims include an increased risk of thyroid cancer and leukemia. 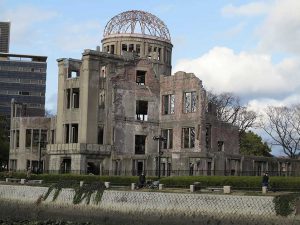 When the citizens of Hiroshima were still grieving, the second atomic bomb was dropped again by the United States. This time the target is not located on the main island, but in a small town in the south of Japan’s third-largest island, Nagasaki. August 9, 1945, one of the largest port cities in southern Japan, also experienced the same thing with Hiroshima. Although the bomb on Nagasaki is stronger than the Hiroshima bomb, the impact experienced by this city is not as big as Hiroshima, because the bomb fell some distance from the city center in a hilly and humid area. If added together, there were more than 200,000 deaths from the two bombs in the two cities above.

Six days later, on August 15, 1945, Emperor Hirohito announced that Japan surrendered, and on September 2, 1945, Japan’s defeat in World War II was officially signed. After the war, there were two important things that must be done by the United States and its allies, namely the demilitarization and democratization of Japan. The Japanese armed forces were disbanded in November 1946, and through the formation of article 9 of the Japanese constitution, Japan would not take part in the war anymore.

After the war, the United States and its allies called for a major change in October 1945, which guaranteed freedom of expression, the press, and association as well as the right to form a union of workers and peasants. Through this step, the United States clearly called for democracy in Japan. Subsequently, a law was formed which reduced the power of the emperor as the highest monarchal government to “symbol of the state and the unity of society.” Postwar Japan became part of a capitalist world that glorified the understanding of peace in the midst of modern world society. 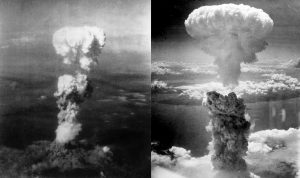 The atomic bombs on Hiroshima and Nagasaki changed not only Japan but also the world. This humanitarian tragedy is celebrated annually on August 6 and 9 in Hiroshima and Nagasaki. The ground zero where the atomic bomb first fell was made a memorial to peace, and tens of thousands of people gather here every year to commemorate the atrocities of war. This year too, the 74th anniversary of the bombing in Hiroshima was held at the Hiroshima Peace Memorial Park and was attended by around fifty thousand people from various countries. Prime Minister of Japan, Shinzo Abe, in his speech, hoped to create a world without nuclear weapons even though Japan rejected the UN agreement on nuclear which was inaugurated last month and was on the side of nuclear-armed countries such as Britain, France, and the United States.